No products in the cart.

Managing director Gary Wallace told PrintWeek that the acquisition was extremely significant because it meant the company was one of the “few printers in the UK” to have three flatbed printers of the same quality and capability under one roof.

“The output quality of these machines means we can challenge the litho market,” he added.

According to Wallace, the company has invested in the new equipment, which is fitted with a reel-to-reel facility, to cope with Wallace Print’s exponential growth.

He said: “This now allows us to print 100sqm per hour at near photographic quality direct to any substrate onto a sheet size of 2,490mm x 1,300mm. We will now be attacking the longer run market.” 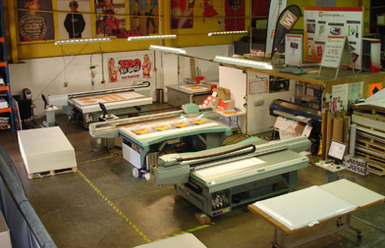 Wallace said that the new equipment would enable the company to retain the majority of its £250,000 annual print output in-house, and that he expected to see a full return on investment in 12 months. Turnover is expected to grow from £2.25m to £2.75m in the same period, he added.

“Capital investment plans for spring 2014 are in already in place with discussions with various suppliers, so it’s a very exciting time,” said Wallace.

To cope with the anticipated growth Wallace has employed new general manager John Anscomb as well as an extra Mac operator to “avoid any bottlenecks” that may arise from increased output.

Wallace said the company was facing “a sea of opportunity” and new roles would be created in operations as and when required. “We are one of the few private sector printers to be continually recruiting with five new roles created in 2012,” he added.

“We at Wallace are working incredibly hard, we’re continuing to be successful concentrating on very high client service levels with the foresight to adapt ahead of our competitors across emerging markets. Passion alone is no substitute for planning,” Wallace said.

Want to stay up to date?

If you would like to stay up to date with Wallace Print’s business updates, why don’t you sign up to our newsletter?

We are one of the UK’s leading large format printers with an in-house installation team with expertise across many sectors.

If you would like to stay up to date with Wallace Print’s business updates, why don’t you sign up to our newsletter?

Let us know what you're looking for.

Get in touch via our contact form to find out more about how Wallace Print can help you transform your print project. Our expert account managers are on hand to provide advice, quotes, and assistance – however, and wherever you need it.

Get in touch via our contact form to find out more about how Wallace Print can help you transform your print project.